We Live in a 3D World

Well... it's been quite a while since the last blog post and a lot has changed in that time. Among them is the addition of a 3D printer. It's been on the shopping list for many years now and in the past they have been far too cost prohibitive to warrant purchasing one just so I could occasional produce a custom 3D part. Any time a custom 3D part was needed in the past, I often turned to Shapeways.com to do the printing. Although expensive, they turn out quality products. As of late though, 3D printers have finally come down in price enough to say "what the heck" and I pulled the trigger on getting one. Say hello to the new Elegoo Neptune 2D 2-color printer.... 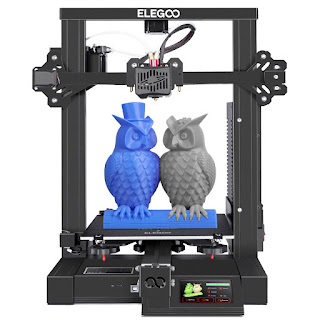 As for the "why" of the purchase, as mentioned, I have occasionally sent out to have parts printed. A single Keystone grommet that I have on my Shapeways store can set you back $51 (and that's just the raw cost... not including any tax or shipping). The printer was just a shade north of $200... so, after printing only 5 of those big jacks (of which my material cost would be under $3), I will have already hit my ROI.

In all seriousness though, it will come in quite handy for various projects. Having the ability to just turn out a part on demand without having to send away for it and wait 2 weeks for a part that I could instead turn out in an evening for less than 1/10th the cost will be really nice. I'm sure I'll still use Shapeways from time to time for things I'm unable to print (like printing something in brass or stainless steel). But, those will be rare I suspect. I also feel that I will have a deeper appreciation for some of what goes on at a few of the dental offices I work with who 3D print custom custom alignment retainers. All be it... they use 3D resin printing for that... so, similar concepts, but a different fabrication method.

November 24, 2020
Revisiting An Old Friend The 3-2-1 rule for backups has been around for decades. It's a rather simple principle you can find documentation on almost anywhere backups are discussed. The rules are as follows: 3 copies of your data 2 media types 1 copy is off-site 3 Copies of Your Data The principal is simple, you have 3 copies of your data (at a minimum) consisting of the following: 1 working copy (your production data) 1 local backup copy for fast backup & restoration tasks 1 off-site copy for disaster recovery 2 Media Types This one is hotly debated to mean many things depending on who you talk to. On the extreme end, some will say that it means having something vastly different in storage like Hard Disk Drives (HDD) as one media type and Linear Tape-Open (LTO) as another. The thought being that if you have different "media types" that you would avoid a common mode of failure. Concerns of a bug or virus being able to exploit a weakness in a common operating system,
Post a Comment
Read more

September 06, 2022
The joke is that the definition of an expert is someone who's made all possible mistakes in a very narrow field of study. Well... Apparently I'm not an expert yet because I just had made a mistake this past week. Hopefully by sharing this, someone else can learn from my mistake to prevent them from going through the same pain I just did. Thankfully, this mistake wasn't an earth shattering issue. More of an annoyance really than anything. Still... not something I would want to go through again. So, without further adieu... I share with you this "Lesson Learned In Pain: Disk Defragmentation" As a Managed Service Provider (MSP), one of my services is to provide storage for off-site backups. And, as one would expect, I manage the server that these backups land on. One of the storage servers is winding down on its service life but is not yet completely empty. There are still a handful of backups (and most of those are for company internal use) that had either not aged
Post a Comment
Read more